skip to main | skip to sidebar

The first place on my travels has been Russia and the photos below show windows from Moscow and St Petersburg.  To compare these windows to London's, I have to take into consideration that when I last went round London's windows it was Christmas so most displays had been assigned a large chunk of the years visual merchandising budget to them and had been thought about for months previously.  I've seen most of the Russian displays in their January sale period which usually in terms of budget and effort is at the other end of the scale to Christmas displays.  Also, presumably because of its communist past where there was no interest in giving the masses choice, let alone attractive product displays, Russia's large shops/department stores don't seem to have reached the same level as London's VM leaders such as Liberty, Harrods and Selfridges in terms of display concepts and skill.  Having taken all that into consideration, I would say that the Russian results were just as varied as my London ones were.  I loved some displays as they had been thought through carefully and had been skillfully put together but there were some that I feel could have been improved by tweaking a couple of things. 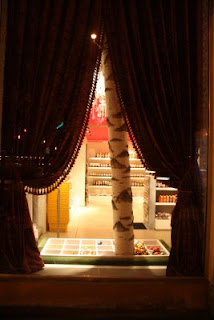 This window made me intrigued, the red fringed curtains and the chandeliers gave it an exclusive image and this is replicated by the spacious, glossy shop interior and the meticulously placed products.  However, I'm just not sure about the tree trunk!? 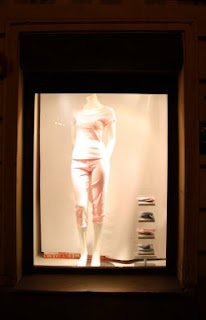 This window is simple but uninspiring.  Maybe a darker background would have helped the pale pink clothes stand out.  Also it looks messy because the backdrop doesn't meet the floor and you can see the bright logo off some boxes at the bottom. 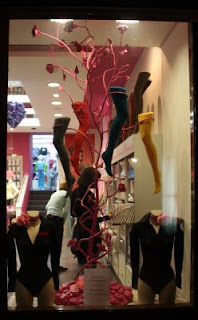 I thought this display was great - very eye-catching.  I love the bright pink tree that holds the colourfully clad legs - very funky! 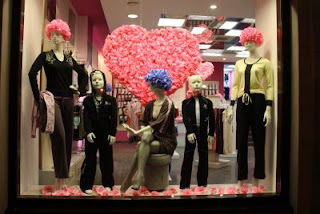 This window was part of the same shop as the display above and was as equally eye-catching but I don't think it worked quite as well.  I love the large petal covered heart, which is mimicked in the shop with smaller versions.  The petals on the floor and the floral hats the mannequins are wearing tie it all together.  However, I think either none of the mannequins should have worn the hats or all the mannequins should have worn them, in different colours to the pink heart, and maybe with lighter coloured clothes on.  The heavy black jogger suits jar slightly against the pastel colours.  The mannequin which works best is the one in the yellow top as it looks slightly softer compared to the others. 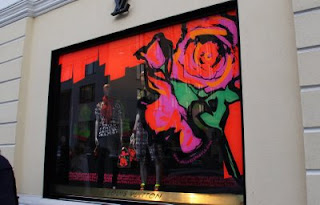 Louis Vuitton definitely know what they're doing.  You can see their bright funky window transfers for miles away!  It has clearly been thought about as the colours on the window are reflected in the clothes, which brings the look together. 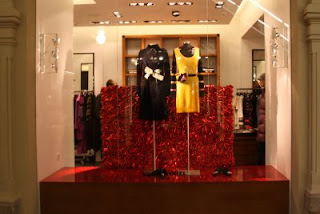 I thought this window looked simple and classy.  The black and yellow dresses stand out against the rich red and the intricate ribbon detail on the back panel add interest. 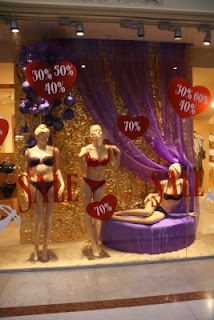 I found this display interesting but slightly tacky.  I'm not sure about the gold foil flat and the purple baubles.  If the baubles were removed and the gold changed to a different colour, possibly silver or a dusky pink it could look a bit classier. 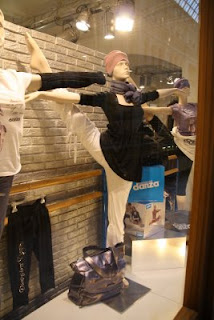 I loved the poses of these dancing mannequins - the look was strengthened as the mannequins had the same pose in sets of three.  The brick walls and dance beams add to the look. 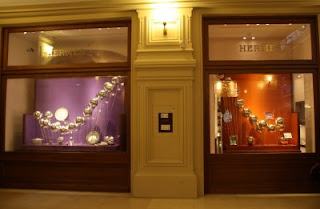 The silver balls on spindles sweeping across the windows certainly catch the eye but I don't think the products have been displayed to their best effect.  They have mostly been hidden between the spindles.  It would have looked better if they were displayed on the empty wall above the silver balls as that's where the eye is drawn to. 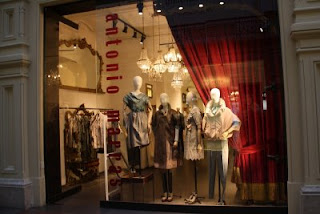 This shop is slightly similar to the shop in the first photo in this post with its theatrical red curtain and chandeliers.  The vintage look these create matches the product perfectly - high quality clothes with a vintage twist.  The look is carried on through the intricately gilded mirror and the mannequins with wooden stands - fantastic. 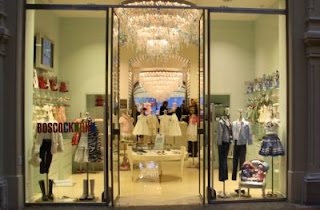 The decor of the this shop - everything from the ornately carved furniture to the massive crystal chandeliers to the minimalist looking displays certainly give the impression of a high end baby store. 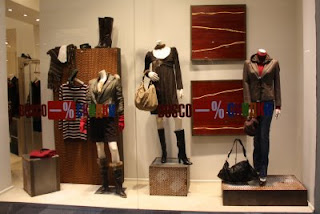 Interest is added to this display with the mannequins at different heights but generally it all just feels a bit put together.  The two red paintings on the back wall take away from the clothes as the eye concentrates on these instead.  Also, the clothes hung on the tall wicker box look slightly random.  Instead of having these I would probably just have one or two other mannequins as these would display the clothes much better.  Also that black bag in the right hand corner would look a lot better if it was held by a mannequin. 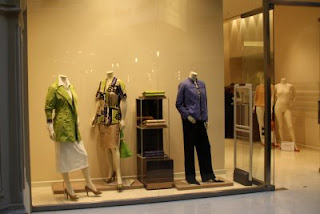 The zig zag position of these mannequins adds interest and depth to an otherwise boring display.  Minimalism might have been the look they wanted but if they added an image, words or decorative window transfer to the space above the display then it might attract a few more customers eyes. 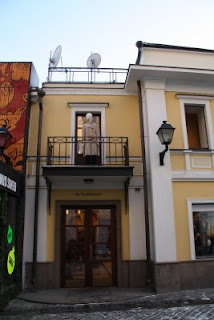 This mannequin on the balcony caught my eye because I've never seen a mannequin outside before!  I thought it was quite a clever idea - it certainly got me thinking! 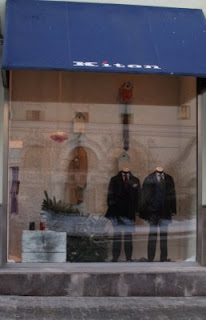 This display is very random - I'm not sure what the fallen Christmas tree or the wooden box on the floor add to the display.  Also the clothes hanging limply off the bird houses aren't really selling themselves.  The bird houses could look much more effective maybe in clusters or they could be placed to make a frame around the mannequins. 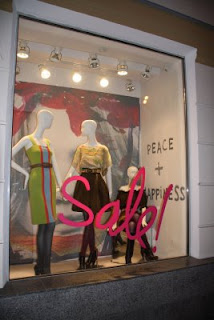 I like this window - the funky clothes match the arty background and interest is added with 'Peace + Happiness' written on the side.  Also it's probably one of the best 'Sale' signs I've ever seen!
Posted by Vicky at 08:43 No comments:

Vicky
United Kingdom
Hi there, thank you for visiting my blog! I decided to set up this blog about visual merchandising to use as a reference and inspiration site during my career within the visual merchandising industry. The photos in this blog are of displays that have caught my eye (in a good or bad way!). They include photos from my travels round the world - there are some varied results and interesting comparisons! My background lies in spacial design with a degree in Design for Film and Television, freelance experience in various TV art departments and previous full time employment as a Trainee Event Designer for a London events company. I also have wide ranging visual merchandising experience including permanent and freelance display work for shops, windows and in-store, and also exhibitions. This work includes two years as a Visual Merchandiser for Habitat working in both the Liverpool and Chester stores and then a year and four months for a small chain of independent ethical food and goods stores in Edinburgh. If you have any comments please do not hesitate to contact me through this blog. Many thanks and happy reading!