skip to main | skip to sidebar

I took these photos during my tour of London's Christmas windows.  They're from the shop Bluebird and I think they show some fantastic examples of in store display and design.  The ceiling of bulbs defines the male clothing department and the hoards of pearls denote the more feminine side of the stores clothing range. 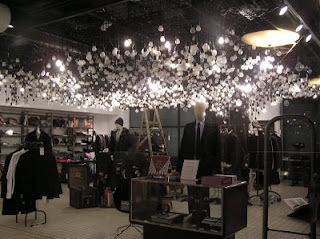 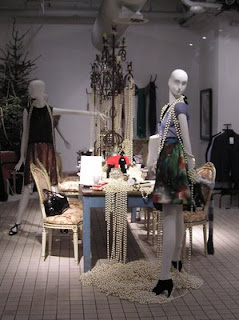 The windows in yuletide London were very varied and some were more successful than others.  A lot of them harked back to simpler times.  Liberty of London had a Victorianesque circus theme with an eclectic mix of bunting, chandeliers, ribbons, striped material, black and white reference photos, iron cages and strings of bulbs illuminating the stacks of merchandise. 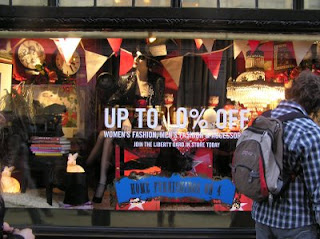 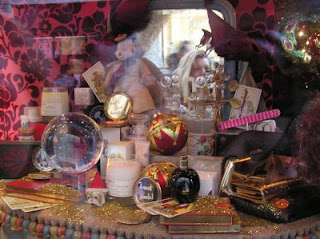 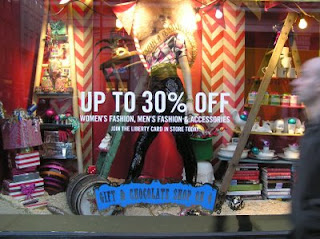 While Fortnum and Mason had windows following the tale of The Snow Queen. 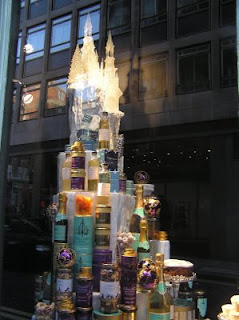 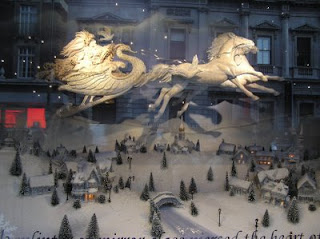 Others had more of a modern edge, like Gap's minimalist 2D cream knitted trees and reindeers and Harrods sleek James Bond theme. 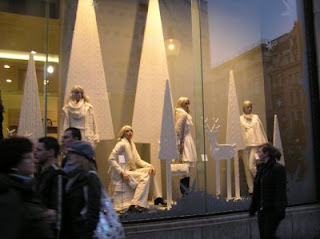 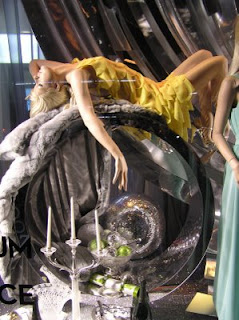 I was impressed with all of these, especially the Liberty of London windows which I could have looked at for hours, trying to spot the designers names which were written or painted onto props such as a saw or mirrors on powder compacts.  There were however some displays that didn't quite take my fancy.  Although I thought parts of it displayed strokes of genius with its geometric jewel theme, some of the Harvey Nichols windows were slightly tacky looking with a mixture of glittery plastic hanging 3D jewels, mirror balls and plastic beads and jewel and star window transfers.  Also the overall compositions of props, mannequins and merchandise looked a bit random and a lot of the merchandise was displayed in piles on the floor meaning that unless you went up really close to look, they were obscured by the strips of black window transfer running along the bottom of the windows.   I think it would have been better if most of the merchandise were displayed in the jewels like in the photo immediately below. 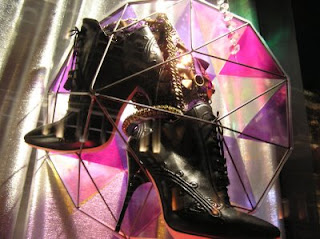 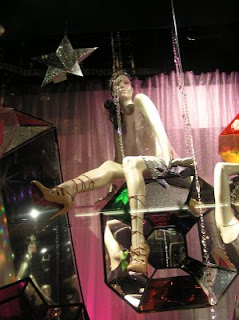 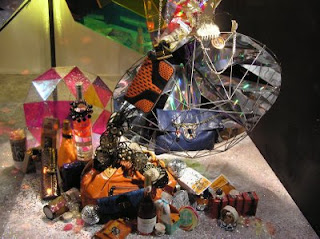 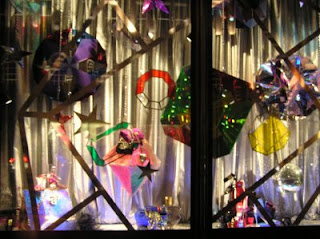 There was also this little fashion boutique that I came across that had a fantastic idea of having a lovely lace screen with a hole in the middle, presumably in the hope that the eye would be drawn to this area.  However, there are three mannequins arranged in the hole but they are all squashed to the side or the bottom so the eye focuses on nothingness! 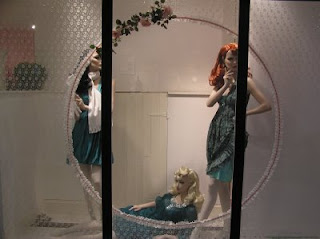 So there were ups and downs in my Christmas window search in London, but none the less it was fascinating to study the different ways shops display their merchandise, and it must be remembered, variety is the spice of life!
Posted by Vicky at 10:47 1 comment:

Vicky
United Kingdom
Hi there, thank you for visiting my blog! I decided to set up this blog about visual merchandising to use as a reference and inspiration site during my career within the visual merchandising industry. The photos in this blog are of displays that have caught my eye (in a good or bad way!). They include photos from my travels round the world - there are some varied results and interesting comparisons! My background lies in spacial design with a degree in Design for Film and Television, freelance experience in various TV art departments and previous full time employment as a Trainee Event Designer for a London events company. I also have wide ranging visual merchandising experience including permanent and freelance display work for shops, windows and in-store, and also exhibitions. This work includes two years as a Visual Merchandiser for Habitat working in both the Liverpool and Chester stores and then a year and four months for a small chain of independent ethical food and goods stores in Edinburgh. If you have any comments please do not hesitate to contact me through this blog. Many thanks and happy reading!